Somebody invents television, the first car, the first lamp and etc., but there must be someone who has invented the first slot machine. The name of this genius is Charles Fey, we owe all our fortune and misfortune, entertainment and in some cases addiction exactly to this person.

The legend of the slots

So what did he manage to do that he has converted into the gambling slot legend? Just intention and idea. Yeah, having the idea and some skills - the same as having the power, because in your mind is being elaborated the plan how to realize it in life. What he exactly did. He was the simple mechanic, even not from the USA, he had his origin in Germany. And one day in the 80th he created it - the brainchild which bears the name of the Liberty Bell. Thus the slot machines history took its roots.

And in addition to the fact that he did create the earliest slot machine and became eminent all over the world, he had the serious problems with health. The American doctors claimed the diagnosis of TB that could make the other person depressive and be ready for the near death, but not this creator. He bypassed this woman with the scythe and what is more left the most significant track after him in the world of slot game gambling.

The childhood and youth of Liberty Bell

The birthday of this beauty approximately began in the 1980th but, different sources give us different dates, so we just stop at this appointment. As usually the first things are not as ideal as the creator wanted. Yeah, Charles Fey wanted to improve his machine to the unrecognizing but the technology at that time wasn't at such peak as it's now, so he had to satisfy with what he had. So what were the main peculiarities of the Liberty Bell? Look here: 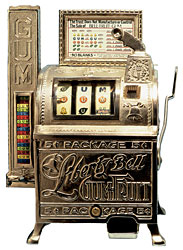 But instead of all the problems which concerned Liberty Bell, Charles Fey didn't want to sell all the rights to this baby, only receiving the 50% of its profits. Later of course the machine was being improved by the companies with which the creator was cooperating, and at last cam Money Honey which totally changed the machine with its innovative technologies. But nobody forgets about its ancestors. It's our past.